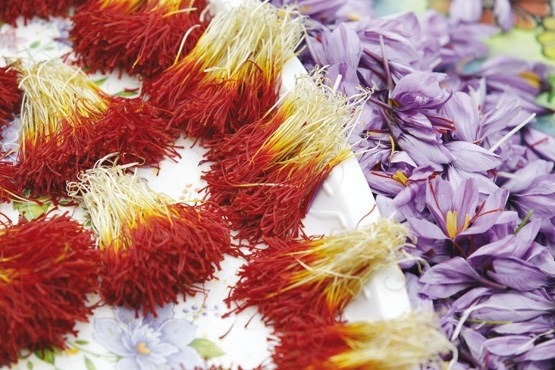 The richest property of saffron technically belong to Bunch saffron because it has all part and all properties together in one package.

saffron Experts for their own usage , use bunch saffron which justified economically and usage feasibility.

Nowadays due to low price of the Bunch saffron and less benefits for the producers ,

farmers do not process Bunch saffron and almost prefer to produce all red Negin , Sargol and pushal due to its high demand .

people generally are not aware of the bunch saffron benefits and properties ,

as a result the demand of bunch saffron is very low and not even considerable comparing to other categories.

each year bunch saffron has less produced comparing last year and is getting rarely in market.

The first product of Saffron is Bunch Saffron which is the most common method of trading among farmers and producers.

This type of Saffron displays the completed threads of Saffron from the red stigma to white root.

The whole Saffron package or Bunch Saffron is the natural Saffron available in the marker because no change can be seen in it.

For collecting this type of Saffron, the Saffron stigmas associated with cream are collected together to form a cluster and finally a strand is used to wrap the cluster from the middle part of I and is dried without any change in the cluster.

We offer Iran National Standards, Organic and Halal certified products which we ship all around the world to 5 continents. Our products used mainly as a natural flavoring & coloring & aromatic in varieties of our foods, drinks, desserts, pastries, and beverages, pharmaceutical especially in family and national celebrations.